In the past, we have received comments and complaints regarding water washing onto the tracks from our restroom cars. Because of this, we feel it may be helpful to clarify what exactly is occurring when this happens.

First, the water released from the car is not sewage. It is treated water. Bacteria has been used to turn what was sewage into liquid and mostly CO2 gas. This by-product, known as gray water, meets antipollution recommendations of the Association of American Railroads, which exceeds the requirements of the Food and Drug Administration.

Once treated, this gray water can then be recycled and returned into the environment. The tanks onboard our trains which house this water are designed to seep over the tank when full, and will naturally seep more based on the motion and how level the train is. The discharged valve of the tanks is not timed or controlled and it discharges cleaned water randomly. 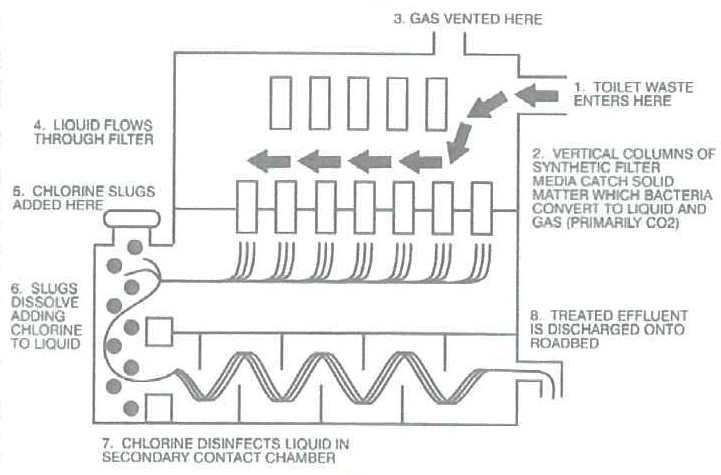 Here is a more technical write-up about how this system works:

The toilet and waste treatment tank assembly uses compressed air to flush toilet water and waste into an underfloor-mounted waste treatment tank, where it is chemically treated and then discharged directly to the roadbed. Water for toilet flushing is provided from a storage tank mounted above the toilet room. Upon manual actuation of the flush pushbutton, air is supplied into a valve, combined with fresh water, and the toilet is flushed.

The secondary chlorinator contains a series of baffles which extends the time of contact for the chlorinated effluent, thus insuring the bacteria is killed. This total bacteria kill allows the Microphor system to, as previously stated, meet antipollution recommendations of the Association of American Railroads, which exceeds the requirements of the Food and Drug Administration. The treatment of effluent is then discharged directly on the roadbed.

That's our waste treatment system in a nutshell. Hopefully, this helps to clarify what riders witness on the railroad tracks.

A Look Back - 5 Years Ago Today

The Crystal City Station Improvements project is scheduled to complete the Preliminary Engineering (PE) and National Environmental Policy Act (NEPA) review phase of the project by spring 2021. The station improvements include an island platform with two entrances within the existing railroad right-of-way.