VRE's security strategy takes a system wide approach and considers the following as our security assets: passengers, train crews, VRE staff, law enforcement partners, host railroads, special programs and community. All of these facets combine to create one community dedicated to the safety of VRE as a rail system.

Passengers At VRE, our top priority is your safety. This is an issue we take very seriously and we take every step we can to make your commute safe. However, as with everything, in life there are things that you, as a passenger, can and should do to keep one's self out of harm's way.

On an average weekday there are about 20,000 passenger trips on VRE. This means 20,000 pairs of eyes. VRE reminds our passengers to contact a VRE conductor if they notice:

If you see a practice that you feel may be unsafe, please report it to your conductor or to VRE. All safety and security concerns are sent directly to our Manager of Safety and Security.

You're our eyes and ears and we want to know what you see!

VRE Conductors and Engineers operate across our tracks in virtually the same manner every day. Their ability to memorize the territory is paramount to our operational success as well as safety. Our crews are experienced rail veterans who are well versed in knowing how the railroad runs and how a safe railroad should appear. In addition to this experience, they are regularly trained and briefed on various security awareness practices, and are continuously kept informed of possible safety and security concerns based on incidents that may have occurred in or outside the US.

In addition, our crews are trained on appropriate responses to daily incidents such a medical emergencies and situations requiring non-medical intervention. They are also heavily trained in large scale incidents that could adversely impact other passengers and trains, such as fires, explosions and derailments.

In order to reinforce these safety practices VRE's train crews receive AED/CPR training and participate in an annual full scale emergency simulation that is conducted by VRE.

VRE's staff possess multifaceted knowledge of the stations, communications and parking facilities across the system.

Detailed routine inspections and consultations with regional law enforcement and federal agencies assist us in staying informed of any security concerns that might affect us — either at our offices, rail yards, stations or on our trains.

VRE staff are in constant contact with various governing agencies, enforcement personnel and other organizations to keep our passengers safe.

In addition, to better handle security issues if they arise, members of VRE staff conduct and participate annually in full scale emergency simulations.

All staff are AED and CPR trained.

VRE does not have its own police personnel. However, we are fully supported by law enforcement partners from all levels of government throughout the VRE service region as well as through full cooperation from official railroad police forces employed by Norfolk Southern, CSXT and Amtrak.

Local and federal law enforcement officers, in conjunction with the Visual Intermodal Prevention and Response (VIPR) team, conduct joint security exercises on board VRE trains and at VRE stations throughout the year.

This allows law enforcement agencies to gain familiarity with our system and maintain a security presence.

VRE also gathers crime data from local law enforcement agencies so that passengers can be kept up to date on recommended practices for staying safe while at our stations and at nearby parking lots.

As a further measure of preparedness and cooperation, VRE invites local, state and federal law enforcement partners to participate in our annual full scale emergency simulations conducted by VRE. Here, members of the previously mentioned authorities can gain complete familiarity with the environment in which we operate, the rail equipment's emergency access and evacuation features and a variety of other situations that responders may face that are unique to passenger rail.

VRE works closely with our host railroads and their law enforcement units to increase security of VRE operations.

As a facet in the National Capitol Region's transportation system, we aggressively share security, safety and service related information with our host railroad systems and invite them to participate in our full scale emergency simulations that we conduct each year. 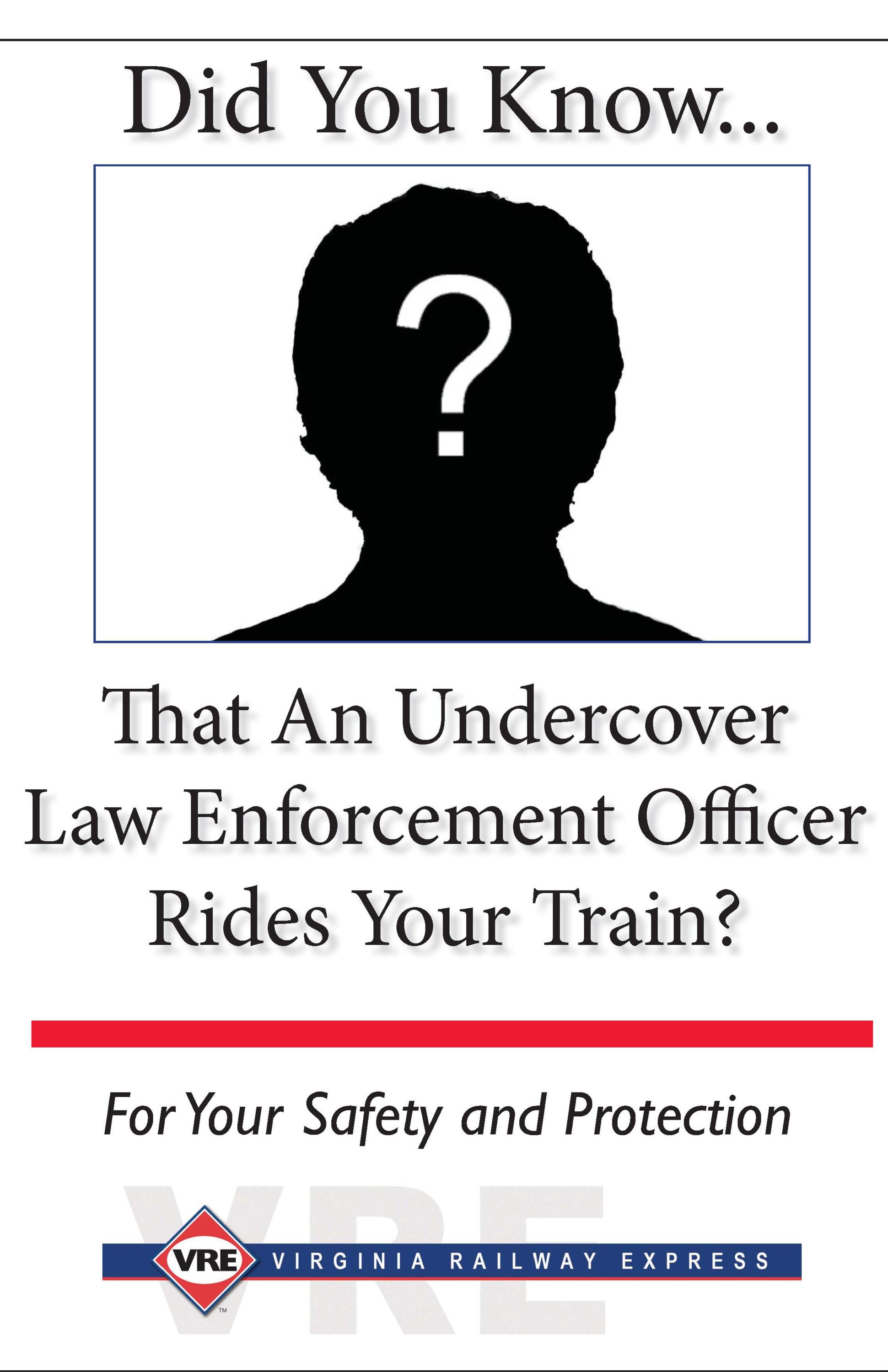 These sworn officers are regular VRE riders and are represented on all VRE trains. In addition to carrying the official capacity to make arrests at any locality within the VRE system, they travel armed and are available to assist VRE Train Crews in the event of a possible emergency or felony taking place on board our trains.

A network of visible, as well as concealed, closed circuit television cameras (CCTV) at select stations and other locations throughout the VRE system have proven invaluable to VRE, law enforcement and our host railroad companies at assisting passengers, deterring criminal acts as well as providing clear witness to activities occurring through the VRE system. Given our great success with the CCTV program, we will continue to expand this camera network as additional funding becomes available.

Community security, especially those that surround VRE, is very important to us.

We maintain strict standards for passenger and parking facilities which ensure they are well-lit, properly monitored, maintained, and patrolled.

As VRE changes and grows we continue to seek input from these communities to ensure that VRE's expansion plans never compromise their safety.

A Look Back - 5 Years Ago Today

The Crystal City Station Improvements project is scheduled to complete the Preliminary Engineering (PE) and National Environmental Policy Act (NEPA) review phase of the project by spring 2021. The station improvements include an island platform with two entrances within the existing railroad right-of-way.