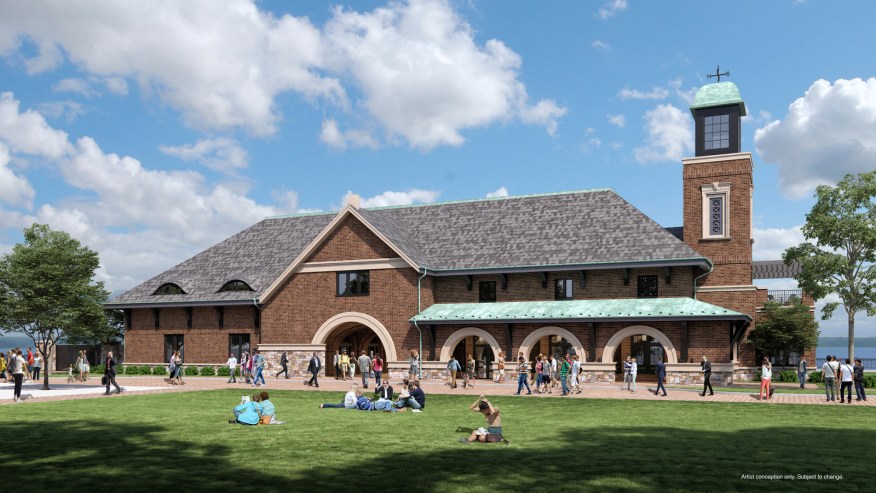 The recently executed, final contract amendment between the Virginia Department of Rail Public Transportation (DRPT) and CSX Transportation (CSX) defined what portion of the third-track corridor improvements will be completed in the immediate future.

This new VRE station will be a key component of Potomac Shores' emerging town center. Situated on the banks of the Potomac River 30 miles south of Washington, D.C., the 1,920-acre community is being developed one of the largest real estate development companies in the U.S. that specializes in large-scale, mixed-use master-planned communities.

Potomac Shores is a waterfront destination being designed as a transit-oriented development due to its convenient access to the on-site VRE station. The proposed station will be located adjacent to the community's town center which will sit along a bluff-top promenade overlooking the Potomac River.

As part of the Arkendale to Powells Creek Third Track project, funded by grants from the American Recovery and Reinvestment Act (ARRA) and the Virginia DRPT, CSX has been constructing a third set of tracks from the Arkendale station northward to Powells Creek to serve alongside the existing CSX tracks. The design and timing of the construction of the Potomac Shores station has been in coordination with this rail improvement project, itself a significant component of the Commonwealth of Virginia's long-term investment strategy to increase rail capacity, including DC2RVA, Atlantic Gateway and Long Bridge.

The train station's planning, engineering and construction is a public-private project requiring the involvement, review and approval of state and federal agencies, and other entities. Potomac Shores has been working with VRE, CSX, the Commonwealth of Virginia, Prince William County and the U.S. Department of Transportation to coordinate the design and construction of the station.

Potomac Shores is contributing funding for design and construction of the train station and parking in partnership with the various agencies. The 16,000 square-foot head house will offer scenic views of the Potomac River, and will serve as the entrance to the boarding platforms at the track level below. A two-story design, the head house is planned to offer restaurants, a coffee shop, office space, dry cleaners, outdoor patios and other uses.

For more information about the proposed facility please see the developer's website at: https://potomacshores.com/lifestyle/train-station/