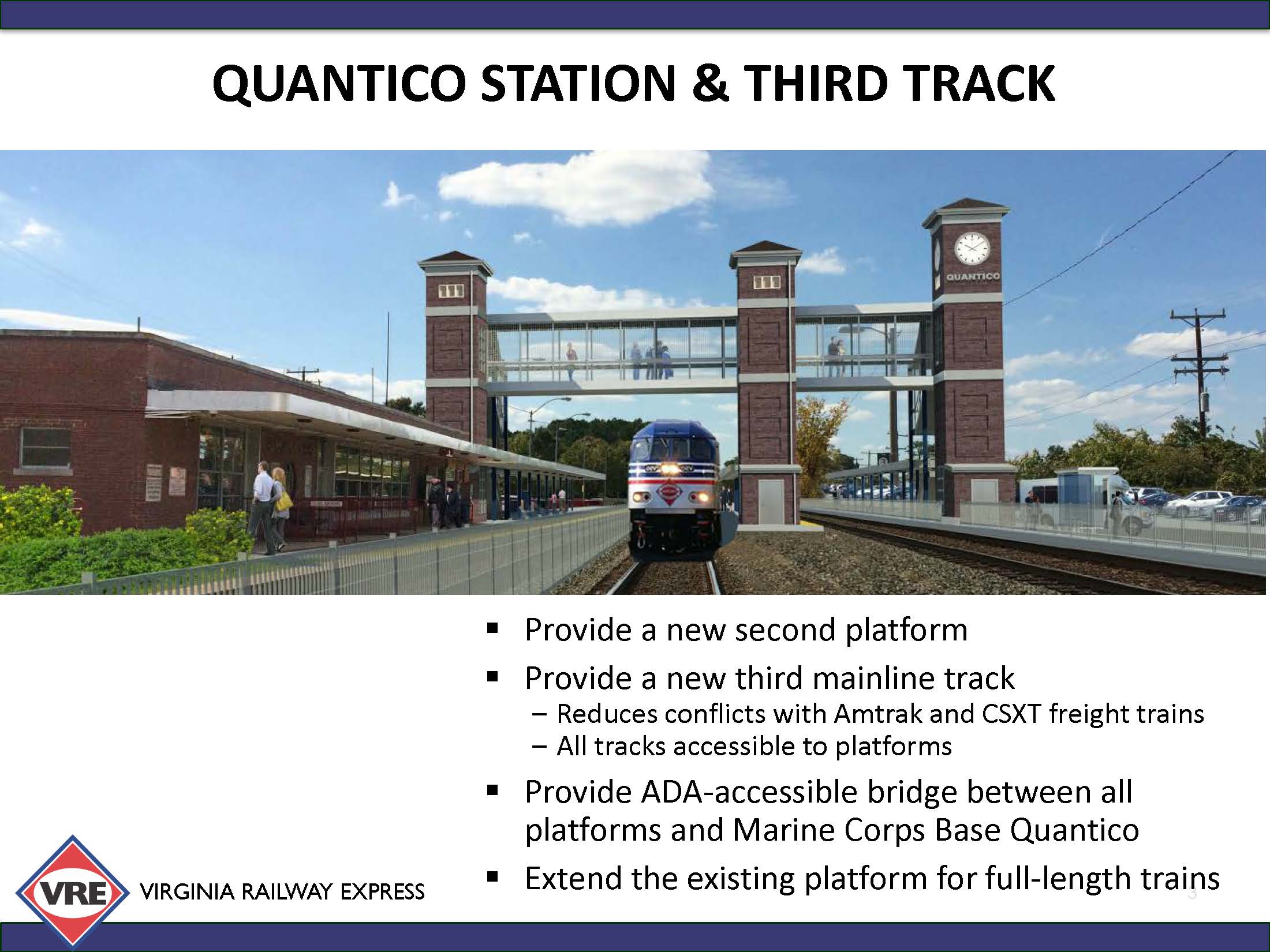 This project will construct a new center platform as well rehabilitate and lengthen the existing platform. Station access will be provided by a new pedestrian bridge over the existing tracks and the future third track.

The station is situated in the Town of Quantico at 550 Railroad Avenue and adjacent to the US Marine Corps Base Quantico. Quantico Station is presently served by Amtrak and VRE passenger trains. The railroad segment where the station is located is owned, maintained, and controlled by CSXT, which also operates freight trains on all tracks through the station. There are two mainline tracks through the station. Passenger trains are primarily routed to Track 2, which has a low-level side platform adjacent to the historic station building and parking lot. On rare occasions, passenger trains are routed to the other track (Track 3) when necessary due to traffic conflicts or other disrupted service condition. Until recently, there was a low-level side platform serving Track 3 that was used only by Amtrak trains. VRE trains did not use the Track 3 platform due to its poor physical condition and the chronic flooding of its access path. When VRE trains are routed via track 3, the standard operating procedure is to position one door on the Potomac Avenue grade crossing adjacent to the station and board and alight passengers at street-level. CSXT and the Virginia Department of Rail and Public Transportation (DRPT) are presently engaged in constructing a new third mainline track through Quantico Station as part of the Arkendale-Powells Creek Third Track Project. DRPT and VRE are also collaborating on the Quantico Station Improvement Project in conjunction with the third track project. The station improvement project will replace the Track 3 side platform with a new island platform between the existing Track 3 and the new third track, extend and improve the existing platform on Track 2, provide a grade-separated pedestrian crossing, and other safety improvements. In August 2016, the third track project contractor inadvertently demolished the entire platform on Track 3. This action has no impact on VRE operations (which continues to use the grade crossing to board and alight passengers when routed via Track 3) but eliminated the platform used by Amtrak. The third track contractor quickly poured a concrete slab to replace the portion of the platform that was not intended to be demolished. VRE is designing and constructing an island platform, pedestrian bridges; extension of the existing platform; and track modifications. Improvements are being coordinated with the
ongoing Arkendale to Powell's Creek third track project being implemented by the Commonwealth of Virginia and CSX.