VRE Gainesville-Haymarket Extension (GHX) study evaluated a number of alternatives to expand capacity along the Virginia Railway Express’ Manassas line. The alternatives included expanding the train storage facility, platform and parking at the VRE’s current Broad Run station, or expanding the Manassas Line via a new extension into the Gainesville and Haymarket communities.

The VRE Operations Board voted to advance the Broad Run Terminus Expansion alternative of the Gainesville-Haymarket Extension Study.

Learn more about the Broad Run Expansion, or browse the Gainesville-Haymarket Study archives below.

The VRE initiated further study of the Gainesville-Haymarket Extension (GHX) in July 2015. The study evaluated expanding capacity along VRE’s Manassas Line. Both an expansion of the current Broad Run station and train storage facility as well as an 11-mile extension of VRE Manassas Line commuter rail service to the Gainesville or Haymarket communities via the Norfolk Southern Railway (NS) B-Line branch were considered.

In March 2017, the VRE Operations Board identified the Broad Run terminus as its preferred Manassas Line expansion alternative. GHX materials are archived below for reference. 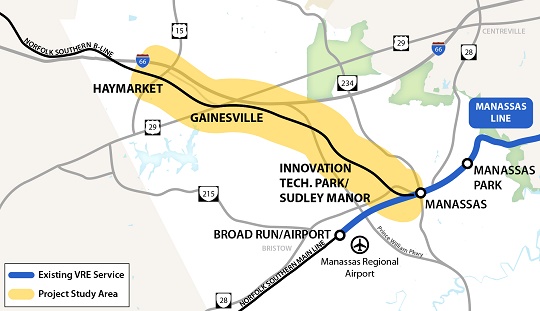 The idea of extending VRE service to the Gainesville-Haymarket area dates to 2004 and earlier. Population growth and the availability of affordable new housing in western Prince William beyond the central Washington, DC-Arlington-Alexandria core area were acknowledged in the 2004 VRE Strategic Plan, VRE’s long-range planning guide, as two of the factors supporting the extension of VRE service westward along the I-66 corridor.

In 2005, the Virginia General Assembly directed the development of a Gainesville-Haymarket Extension Implementation Plan to identify the necessary actions and estimated costs to facilitate the VRE service extension. Additional studies completed in 2009 confirmed the merits of the extension, identified an initial set of potential station locations, and developed an updated set of capital and operating cost estimates.

In 2014, the VRE Operations Board adopted the VRE System Plan 2040 as its new long-range plan. System Plan 2040 provides a framework for capital investments and actions that VRE should pursue through 2040 to best meet regional travel needs. The continued, expansive growth in housing in western Prince William County and beyond coupled with emerging employment centers such as the Innovation Technology Park, Virginia Gateway and George Mason University’s Prince William Campus point to the Gainesville-Haymarket area as a leading prospect for new transit service. This was confirmed in System Plan 2040, which identified the VRE GHX as a priority to expand mobility in the I-66 corridor.

In July 2013, the Commonwealth Transportation Board (CTB) endorsed advancing for further study a set of ten transportation improvements within the I-66 corridor outside the Beltway – including express lanes, additional general purpose lanes, rapid bus service, a Metrorail extension and the VRE Gainesville-Haymarket Extension. The VRE study was anticipated to take approximately two years to complete.